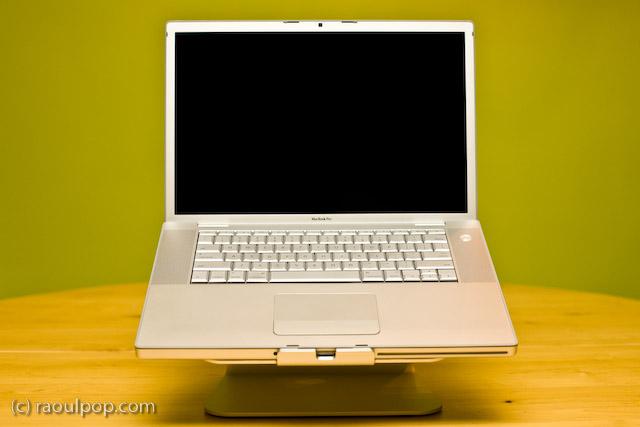 While working on the fifth episode of RTTE, I learned first hand the value of a good backup. The hard drive on my editing computer (my MacBook Pro) died suddenly and without warning. Thankfully, my data was backed up in two geographically different locations.

The day my hard drive died, I’d just gotten done with some file cleanups, and was getting ready to leave for a trip abroad. I shut down my computer, then realized I needed to check on a couple things, and booted it up again, only this time, it wouldn’t start. I kept getting a grey screen, meaning video was working, but it refused to boot into the OS. And I kept hearing the “click of death” as the hard drive churned. I tried booting off the Snow Leopard DVD, but that didn’t work either. I’d tested the hard drive’s SMART status just a couple of weeks before, and the utility had told me the drive had no problems whatsoever.

I had reason to worry for a couple of reasons:

I had no time for further troubleshooting. I had to leave, and my laptop was useless to me. I left it home, and drove away, worried about what would happen when I returned.

A week later, I got home and tried to boot off the DVD again. No luck. I had to send it in, to make sure nothing else was wrong. In Romania, there’s only one Apple-authorized repair shop. They’re in Bucharest, and they’re called Noumax. I sent it to them for a diagnosis, and a couple of days later, I heard back from them: only the hard drive was defective, from what they could tell.

I was pressed for time. I had to edit and release the fifth episode of RTTE, and I also had to shoot some more footage for it. I didn’t have time to wait for the store to fix the laptop, so I asked them to get it back to me, while I ordered a replacement hard drive from an online store with fast, next-day delivery (eMag).

The hard drive and the laptop arrived the next day. I replaced the hard drive, using this guide, and also cleaned the motherboard and CPU fans of dust, then restored the whole system from the latest Time Machine backup. This meant that I got back everything that was on my laptop a few hours before it died.

I’d have preferred to do a clean OS install, then install the apps I needed one by one, then restore my files, especially since I hadn’t reformatted my laptop since I bought it a few years ago, but that would have been a 2-3 day job, and I just didn’t have the time. Thankfully, OS X is so stable that even a 3-year old install, during which I installed and removed many apps, still works fairly fast and doesn’t crash.

Some might say, what’s the big deal? The laptop was backed up, and you restored it… whoopee… Not so fast, grasshopper! The gravity of the situation doesn’t sink in until you realize it’s your work — YEARS of hard work — that you might have just lost because of a hardware failure. That’s when your hands begin to tremble and your throat gets dry, and a few white hairs appear instantly on your head. Even if the data’s backed up (or so you think) until your data’s restored and it’s all there, you just don’t know if you can get it back.

I’ve worked in IT for about 15 years. I’ve restored plenty of machines, desktops and servers alike. I’ve done plenty of backups. But my own computer has never gone down. I’ve never had a catastrophic hardware failure like this one until now. So even though I’ve been exposed to this kind of thing before, I just didn’t realize how painful it is until now. And I didn’t appreciate the value of a good backup until now.

So, here’s my advice to you, as if you didn’t hear it plenty of times in the past… BACK UP YOUR COMPUTER!

If you have a Mac, definitely use Time Machine. It just works. It’s beautifully simple. I’ve been backing up my laptop with Time Machine to the same reliable drive for years. It’s this little LaCie hard drive.

But the LaCie drive might fail at some point, which is why I also back up my data with CrashPlan. For this second backup, I also send my data to a geographically-different location. Since we live in Romania these days, I back up to my parents’ house in the US, where the backup gets stored on a Drobo. And the backup is also encrypted automatically by CrashPlan, which means it can’t be intercepted along the way.

It’s because of my obsessive-compulsive backup strategy that I was able to recover so quickly from the hardware failure. Thankfully, these days backups are made so easy by software like Time Machine and CrashPlan that anyone can keep their work safe. So please, back up your data, and do it often!

One more thing. You know the old saying, every cloud has a silver lining? It was true in my case. When I ordered the new drive for my laptop, I was able to upgrade from its existing 250GB SATA hard drive with an 8MB buffer and 5400 rpm to a spacious 750GB SATA hard drive with a 32MB buffer and 7200 rpm, which means my laptop now churns along a little faster, and has a lot more room for the 1080p footage of my shows. 🙂

3 thoughts on “The value of a good backup”