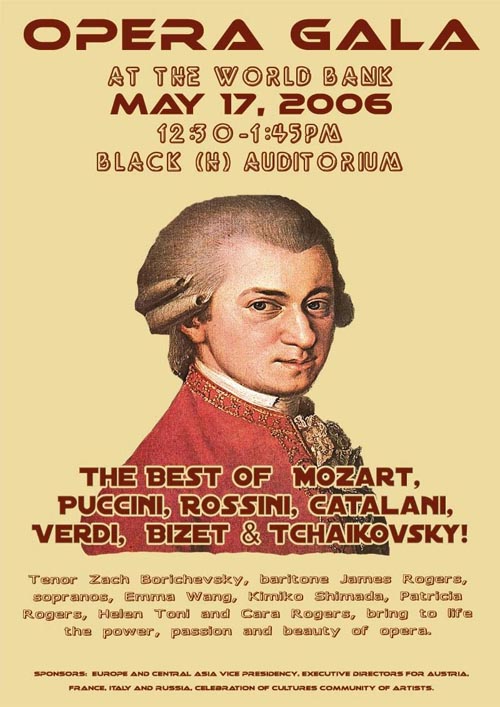 Ligia and I attended the World Bank’s first Opera Gala today. The singers who participated in the program were an eclectic mix: previous and existing bank employees, students enrolled in opera programs at local universities, and professionals. The Gala Program and the Artist Bios can be accessed by clicking on each of their respective links.

The music selections were best hits (well known arias from well known operas). Since most in the audience were already familiar with the music, this gave us all a chance to see how each singer interpreted it. In other words, we were able to compare their performances with the standards we’ve come to expect. Overall, Ligia and I found the program good, with several standout performances.

By far, my favorite performance was that of Helen Toni, when she sang “Vedrai, carino” from Don Giovanni. She’s a retired Bank employee, and was a member of the WB-IMF Chorus for 20 years. She sang that aria just right. Her voice was soft and sweet, not loud, and right on the notes. Ligia and I were both smiling through her performance. It was very, very good.

Another standout performance was given by Cara and Patricia Rogers (daughter and mother, respectively) in “Sull’ aria”, from Le Nozze di Figaro. It was evident they did their homework by practicing it properly. The timing was right on, the voices matched – it was a joy to hear it! Cara then gave another great performance in “Quando men vo”, from La Boheme.

Kimiko Shimada has a great voice and showed its range in “Ebben?… Ne andro lontana” from La Wally. Her powerful voice has a pronounced tremolo.

Last but not least, Yoshinori Hosaka played exquisitely on those pieces where he accompanied the singers. Clearly he is a very good and dedicated piano player. He did not seek the public’s attention, but fulfilled his role as an accompanist perfectly by allowing the singers to shine.

In the end, we were happy to attend. Even though the auditorium where the gala took place wasn’t built for opera, and the voices couldn’t travel properly, it was still a promising start to what I hope will be a regular, annual event at the World Bank. Perhaps a new hall could be found for next year?