Logged into my Technorati account late last week to check my profile settings, and guess what I saw on my photo page? Granted, the message wasn’t for me, it was for every Technorati user, but I thought it was hilarious nonetheless: 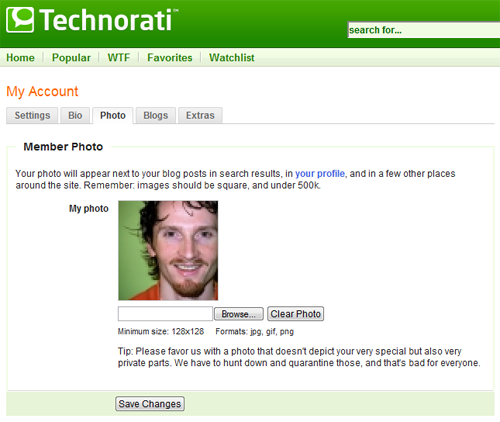 For the benefit of those of you that can’t see the image above, let me quote the text:

“Tip: Please favor us with a photo that doesn’t depict your very special but also very private parts. We have to hunt down and quarantine those, and that’s bad for everyone.”

I guess they’re having problems with nasty people posting nasty pics of themselves, or else they wouldn’t have gone to the trouble of warning users. That’s pretty sad — to know there are people out there with absolutely no sense of decency and self-control. Zooomr had a huge problem with this last year, in Mark II. You could browse its full photo stream — all public photos posted by users, as they posted them, and I did that a lot to discover great photographs. While I found plenty of great photographs that I faved, I also found plenty of pornographic images.

At any rate, that stuff was pretty nasty, and I spent plenty of time emailing Kris and Tom with specific links, and they would dutifully either make those photos private or remove them altogether. Flickr has the same problem, and that’s why they’re rating accounts as Safe, Moderate or Unsafe, which I think is a better approach than Zooomr’s — Kris and Tom are still stuck doing manual removals, even though they promised they’d introduce a feature to allow users to flag questionable photos.

My rantings aside, I thought Technorati’s approach was pretty funny, and I’m glad to see more companies do their part to make sure the nasties don’t get to poison everyone’s good time on the web with their filth.