Today, November 23, 2009, the new Drobo S says hello to the world. It’s a supercharged, triple interface version of the 2nd-generation (FW800) Drobo, with eSATA, FW800, USB 2.0, a faster processor, 5 drive bays and dual drive redundancy. It combines the best of both worlds — the smaller form factor of the regular Drobo with the larger capacity, speed and data protection of the DroboPro. Data Robotics summarizes this as “more capacity, more protection and more performance”.

Excuse my little pat on the back here, but when I first heard that Data Robotics was getting ready for a new product launch, an eSATA interface was the first thing that came to my mind. I’m glad to see I was right.

Data Robotics launched the original Drobo in mid-2007, then upgraded that to what we call the Firewire Drobo toward the end of 2008, introduced the DroboPro in April 2009, and now they’re launching the Drobo S, which you can see here, and the DroboElite, addressed in a separate post, also published today. 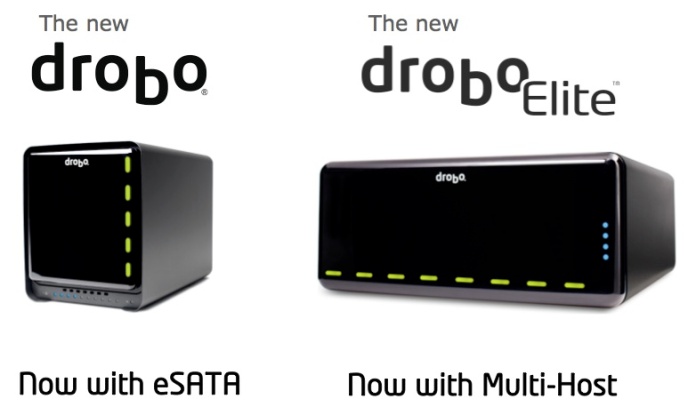 This means the company now has four pieces of hardware in their product line, geared toward different groups of consumers, starting with the desktop storage needs of the media-heavy consumer and going all the way to companies’ server rooms:

Let’s first look at the exterior of the new Drobo S, to see what’s changed there. On its front side, you’ll notice the bezel is different. Whereas the trademark magnetic cover was flush with the metal bezel of the enclosure, now it’s recessed and no longer covers the entire front surface. The capacity meter was kept at the bottom of the enclosure, but it’s no longer underneath the plastic cover, which was kept square rather than made rectangular, to fit the now-taller Drobo. The power and transfer lights were also made visible and placed inline with the capacity meter. A row of vents was added above the capacity meter, to pull in cool air for the drive bays. 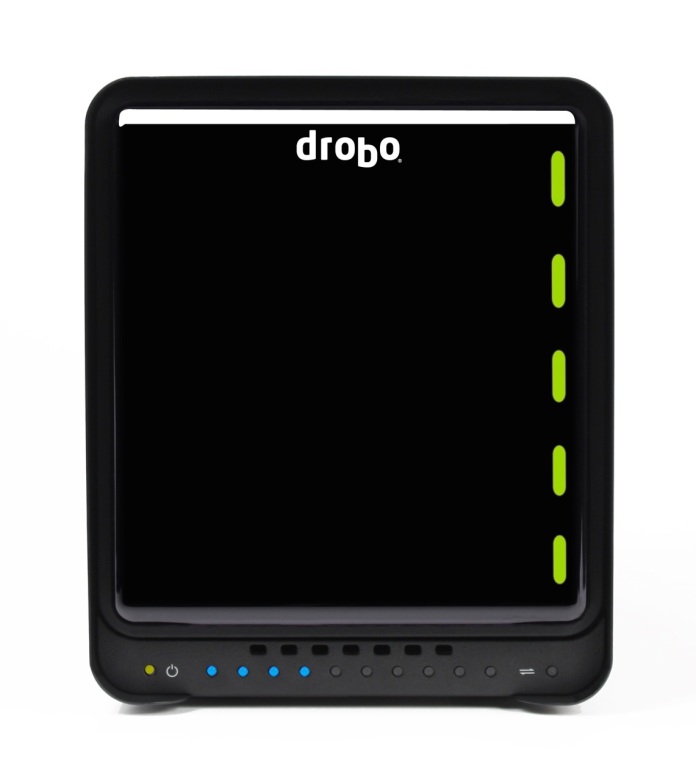 The new dimensions are 5.9″ wide x 7.3″ tall x 10.3″ long, as compared to the regular Drobo’s 6.3″ wide x 6.3″ tall x 10.7″ long. This makes the new Drobo S thinner and shorter than the regular Drobo, in spite of its 5 drive bays and the new eSATA interface. It is taller, though only by a single inch (2.54 cm). That’s an achievement in my book, and I’m sure the Drobo engineers spent quite a bit of time planning out the hardware layout. Kudos to them. The differences are made readily apparent when we look at the regular Drobo and the Drobo S side-by-side. Keep in mind the scale may be a bit off in real life, since I took two separate images and put them together in Photoshop for this article. This image isn’t an official one from Data Robotics, though the individual images are. 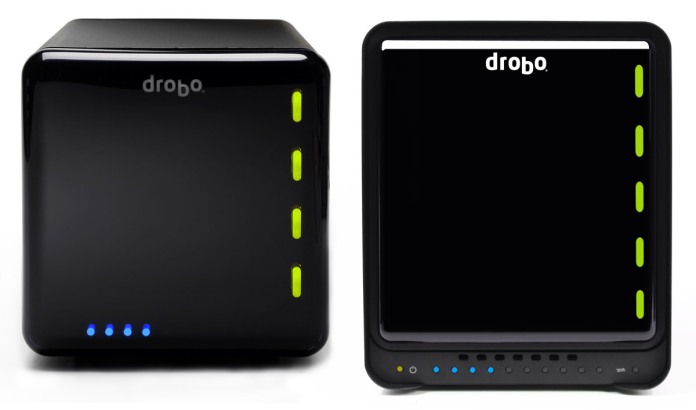 On the back of the new Drobo, we can see a much larger cooling grille, which makes sense given what we’ve discussed above. We also see something new, something which I’ve only seen on the DroboPro so far: a power switch. Then we see the rest of the stuff we expected, like the power connection (which is now marked by a shiny metal circle), the reset switch, the cable lock slot, and, of course, the triple interfaces: eSATA, Firewire 800 and USB 2.0. 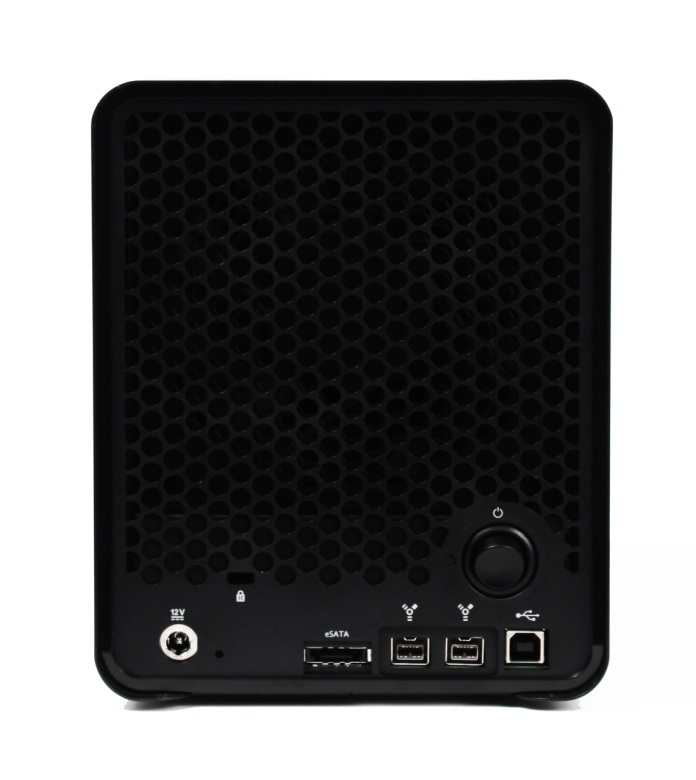 Let’s look at a side-by-side comparison of the backs of the Drobo S and the regular Drobo, so we can see the differences in the design. 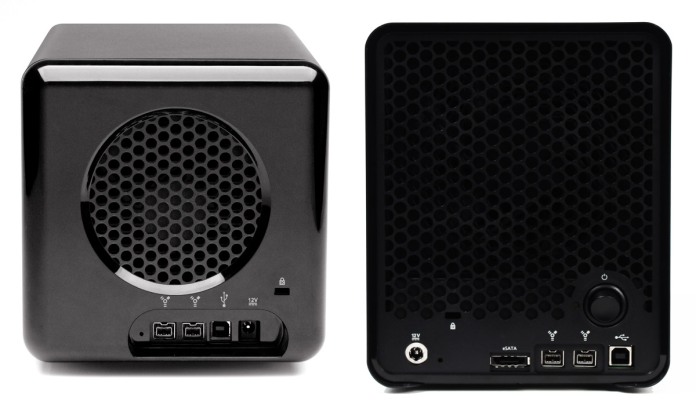 When I look at the Drobo S from all these angles, I’d say its design is much sleeker and more streamlined than that of the regular Drobo. There’s no doubt about it, I love it. I felt from the start that Drobo made storage sexy. There are very few storage enclosures on the market that look really good, and Drobo has looked great from the start. When you combine those looks with its amazing capabilities, the result is well worth my money.

You know what else? I think a future iteration of the regular Drobo’s enclosure will include the design elements of the Drobo S. I also believe at some point this same, newer design philosophy will be carried forward to the DroboPro and the new DroboElite.

Let’s look behind the front cover, to see how things look over there.

The five drive bays are clearly visible here, as well as the five action indicator lights, as Data Robotics calls them. On the Drobo S, the indicator lights give more status messages than on the regular Drobo, because each light is capable of displaying two colors at the same time. You can see what I mean by looking at this indicator scheme.

Now let’s talk about performance. Clearly, with an eSATA port, the new Drobo S must also have the capability to stomach all that data that comes at it. It must be able to process all of it and write it to the drives fast enough to make the new interface worth getting. I haven’t tested the Drobo S in person (yet?) but Data Robotics says the new eSATA interface is “up to 50% faster than FireWire 800“. On the Drobo S, the FireWire 800 interface is also faster than on previous hardware, “up to 25% faster“. All these speeds are due to a new, faster processor that can crunch all of those data bits just as quickly as they get to it, writing each of them across the five drive bays.

In my phone conference with Mark Fuccio from Data Robotics, I asked him why Data Robotics hadn’t included a Gigabit Ethernet interface so that Drobo S could also be a NAS device. He explained that the direct-attach market is 4x bigger than the NAS market, so DRI will always go for that market first, and second, the eSATA interface on the Drobo S is faster than is possible going through file sharing protocols like Windows SMB or Apple’s AFP. The Drobo S has “performance ranges between 70-90 MB/sec or approximately 80-90% of the performance of the DroboPro’s iSCSI connection”.

I also asked him what he thought about Light Peak, and if we might see that in the Drobo as another interface next year. He didn’t say no, but he also didn’t promise anything, which was expected. He said it’s likely that DR will build it into the Drobo when and if Intel finalizes the specs and starts to make it available to companies.

It’s important to mention two features of the Drobo S which are just plain wonderful. One is the dual-drive redundancy, which is a feature borrowed from the DroboPro and is so important for those of us who absolutely must protect our data, or else. You can switch back and forth between single-drive and dual-drive redundancy at any time, but keep in mind there’s a capacity trade-off in dual-drive redundancy mode — that is, you get less available free space since the Drobo must now make sure your data is protected against two drive failures.

Dual drive redundancy is something Data Robotics was able to offer because it included five drive bays on the Drobo S. It would have been overkill on a four-drive unit, because it would have meant even less available space. Another effect of this dual drive redundancy is more capacity, up to 10 TB, as a matter of fact, given current hard drive specs. With five 2 TB drives in the Drobo S, you would indeed have 10 TB of space, but only 7.3 TB would be available for your data; the rest would be kept for data redundancy. Consult the handy chart below to see approximate capacities given typical drive combinations.

The second feature worth mentioning is the self-healing technology included with the Drobo S (also available in the DroboPro and DroboElite), which works as follows:

Even when sitting idle, Drobo S will continually examine the blocks and sectors on every drive, flagging questionable areas. This preemptive “scrubbing” helps ensure your data is being written only to the healthy areas of your drives, and that your data is always safe. Even if a drive fails, Drobo S keeps your data in the safest state possible, utilizing the available space on the remaining healthy drives.

I’d like to know if you get that with any other storage device on the market today. Compare it with RAID 0, where even if your drives don’t fail, any hardware or processor mistake in writing the correct bit sequences to the stripes will cause data corruption, leading to data loss.

I was told the Drobo S will be available right away, as of today. It’s possible that initial supplies will be sold out, but more units will become available later. Suggested retail price is $799 for the Drobo S itself, or $1,799 for the Drobo S loaded with 5×2 TB drives. Although the price may seem high, keep in mind that at 10 TB capacity, it’s only 18 cents per GB for the Drobo S and the drives, together.

The Drobo S is available for purchase from Amazon or from B&H Photo.

Images used courtesy of Data Robotics. Side-by-side comparison shots were created by me, using press images from Data Robotics, so please obtain my permission if you’d like to use them elsewhere.