Remember this article of mine, where I shared my thoughts on why broadband speeds are so far behind just about every other country in the USA? Well, the difference has just gotten even greater.

A little under two months ago, I helped my parents in the US upgrade their broadband from AT&T’s unreliable and slow ADSL to Comcast’s digital cable. This means they went from speeds of 2-3 Mbps down and 512 Kbps up (with AT&T) to 15-16 Mbps down and 3-4 Mbps up with Comcast. That was a huge improvement, but it’s still nothing compared to what is available in Romania at the moment.

Here, Birotec (my ISP) has increased their broadband speeds ten-fold this month. That means I just went from 3 Mbps to 30 Mbps. We went by their store today to pay our bill, and while talking with the customer service rep, I found out about the upgrade. She said it quite matter of factly, as if it was no big deal. It’s a huge deal to me! With Birotec, I can get speeds up to 100 Mbps if I want to. And the broadband speed is almost symmetric upstream and downstream, because it’s built on a fiber optic backbone. I went to speedtest.net and tested my speed today. I’m getting even greater download speeds than advertised, which is amazing. I get speeds up to 54 Mbps downstream! 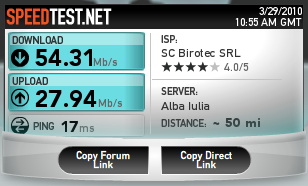 Do you want to know the best part? It still costs me only €10/month for all this blazing speed, and I get a free telephone plan thrown in as well, with my own number. In the US, it costs my parents over $50/month for internet access with Comcast, and if they wanted a phone plan, the price would go up by another $30-40.

Romtelecom, Romania’s largest telephone and internet provider, has also increased their broadband speeds. They’ve begun using a new DSL technology called VDSL, and they’re offering broadband plans at speeds up to 30 Mbps downstream and 6 Mbps upstream. Incidentally, their largest plan (30 Mbps) also costs about €10/month, but you’ve got to keep in mind it’s still DSL and the uplink speeds are slower. Plus, phone service will cost you extra.

I’d love to know which companies can offer the same speeds in the US, and at similar prices. Short of Verizon’s fiber optic network, which is only deployed in limited metro areas, and still costs more, what else is there?

And that begs me to repeat my original question: why are broadband speeds so slow in the US?