When I think of shaving razors currently on the market, I think of cartoon fights where everyone pulls out a bigger gun. Razor companies are constantly trying to outdo each other with more blades. If it’s not the blades, then it’s a “microcomb”, or a vibrating handle… which brings all sorts of other imagery to mind, the kind that has nothing to do with shaving, unless you’re into weird fetishes.

It’s the same kind of approach that software companies use these days. Their code gets so bloated, because they never take the time to clean it up, that all they can hope for is that hardware manufacturers can throw more RAM and MHz at the problem so they don’t have to optimize their code. Apple took a different approach with the Snow Leopard operating system: they took almost a year to clean it up, throwing out the junk. That’s why I admire Apple.

Made better through improved design? Not really.

On the other hand, companies like Gillette and their competitors lost sight of the art of shaving and figured everyone was a nitwit who couldn’t learn to shave properly and couldn’t take care of their razor, so they overdesigned their razors for the lowest common denominator. In the process, the razor became a plastic toy, not a tool, a crappy little thing you throw away instead of something you respect and maintain, because it keeps you looking civilized.

Designed for profit? Thank you sir, may I have another?

Because it became a throw-away toy, their profit margins increased. Because the razors no longer lasted a lifetime, they could sell more of them. You just look down the line of razor models from the Gillette over the years, and you’ll see they get more and more plasticky, with less metal parts. If they have metal in them, it’s not in the head (certainly not where the cartridges attach to the handle); that part needs to be plastic so it breaks after a while.

Don't let its flashy looks fool you. It just can't compare to a good safety razor.

The cartridges have started to cost more as well. A pack of eight cartridges for the Gillette Fusion ProGlide razor (the latest flashy gimmick from Gillette) runs about $30 at Amazon. That’s $3.75 per cartridge, and from my experience, they last about 3-4 shaves. By contrast, a pack of 60 assorted safety razor blades costs $18. That’s 30 cents per blade, and they last about 6-7 shaves. (By the way, I’d recommend that pack for those learning to shave with a safety razor, because it’ll let you try different brands to see which blades work best for your face.) 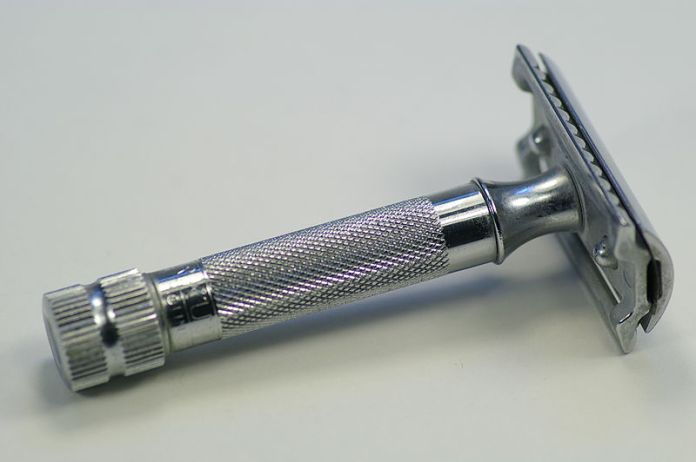 Wait, it gets worse

They also polluted the environment with all that disposable plastic crap. Now you throw away the razor, not just the blades. And the blades aren’t just steel, which is perfectly recyclable, but they’re plastic and metal, which is annoyingly difficult to recycle, because you need to separate the two materials from each other, and it’s just not worth the trouble.

It’s such a shame. I used to admire Gillette about 10 years ago, before I got disappointed with all the stuff they’re doing these days. I still shave with a classic Gillette Safety Razor, pictured below. I still keep my grandfather’s Gillette Heavy Duty Safety Razor, and plan to use that when my own breaks down. Things used to be simple and beautiful. Where did they go wrong?

If you’d like to learn how to shave properly, check out my wet shaving guide. And there’s also a video, embedded below.

3 thoughts on “Shaving: art versus design versus profit”