At the end of July, we brought home an addition to our pet family: a fluffy little grey bunny we called Fritz. His full name is actually Fritz the Wonder Bunny from Brazil. You might think his name’s unusual, but he’s done a great deal to earn it, as you’ll see in a future post. Let’s meet him!

He truly was tiny. He fit into the palm of my hand — a scared little grey furball with a heartbeat so fast I thought he was going to burst.

After he calmed down and ate some kale leaves and carrots, we introduced him to our cats (we have four of them), and watched carefully to make sure they got along. The kittens were all quite curious to see who (and what) he was. 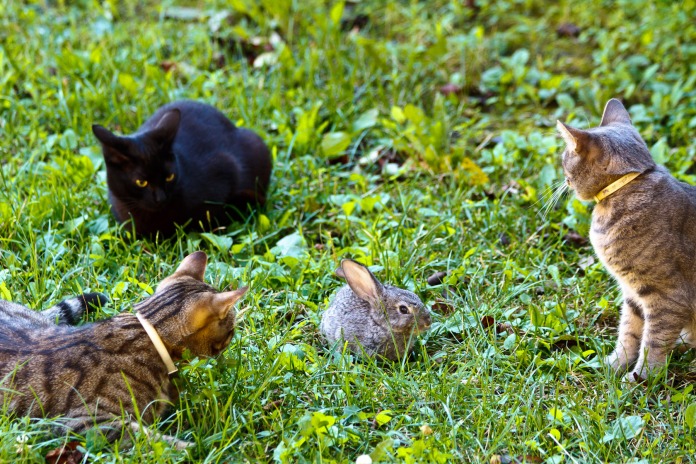 Zuzu (the black one) made her “I don’t like this” face. See how her ears are turned back? Zuzu does that quite often, but she’s friendly as can be. Bubu (the one in the lower left corner) was very curious. He wanted to smell Fritz and touch him and play with him, but Fritz was understandably a little scared of a cat about four times his size (Bubu is a big tabby). Tira (the one on the right) approached Fritz first, touched him with her paw and smelled his scent.

Fritz stood there in the grass, small as he could make himself, probably thinking he’d get gobbled up, but our kittens are those kinds of cats. They’re nice and friendly. They do tend to get a little mischievous at times, but they didn’t want to hurt Fritz.

Next up was Bubu, who could barely contain his curiosity. He wanted to jump on Fritz and play with him, but we managed to calm him down somewhat. 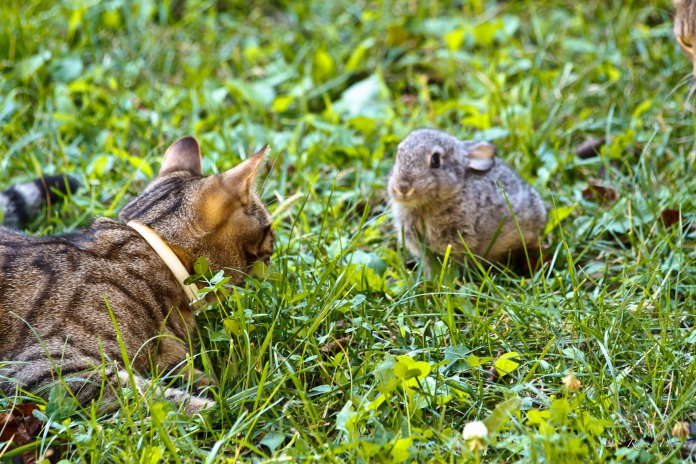 Fritz got accustomed to his surroundings fairly fast, and was soon up and about, smelling the various grasses in our yard and picking what he wanted to eat (he’s quite picky, but in a good way; he’s a veritable gourmand). 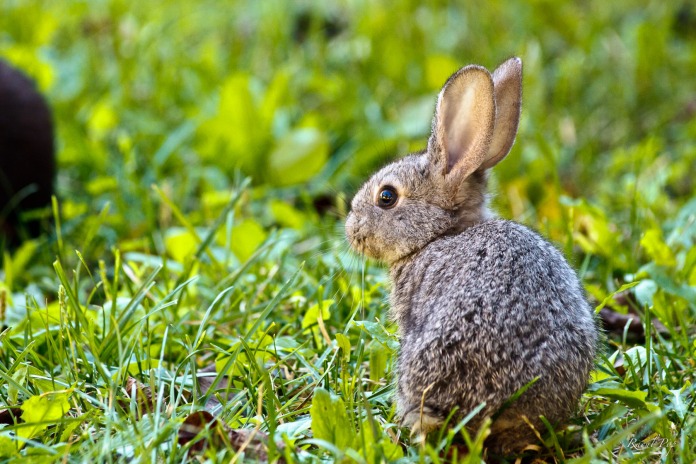 It’s now been about a month since we brought Fritz home, and he’s doing great! We kept him in a little cage for most of the day and all of the night during his first few weeks, because there were a couple of hawks and an owl who had their eye on him. Now that he’s bigger and he’s shown us that he can take care of himself, we let him roam freely through our yard and garden. He’s already found a few great hiding spots. Not even we can find him sometimes. He comes out when he wants to eat and socialize. And he gets along great with all of our cats.

Contrary to popular belief, he hasn’t made short change of our vegetable garden. He’s shown little interest in it so far. He prefers to eat certain kinds of grasses and weeds.

Just so he wouldn’t get lonely, we recently got him a girl companion we called Rita, a fluffy little white bunny whom he already adores; there’ll be more about that soon. Unfortunately for him (and fortunately for us), when he matures a little more, we’ll sterilize him, because, you know the old adage, they’ll be multiplying like rabbits if we don’t…

I’ll leave you with a little rough footage of Fritz eating grass in the yard, shot with my cellphone (so I apologize in advance for the poor video quality). I’ll have better video of Fritz soon!