Today, the DroboPro FS will be announced by Data Robotics. It’s the bigger brother of the Drobo FS, and it’s aimed at creative professionals, SOHOs and SMBs.

There was a gap in Drobo’s file sharing lineup. They had a NAS device, sure (the Drobo FS), but it didn’t have the capacity and the bandwidth of the DroboPro FS, which has two Gigabit Ethernet ports and eight drive bays. 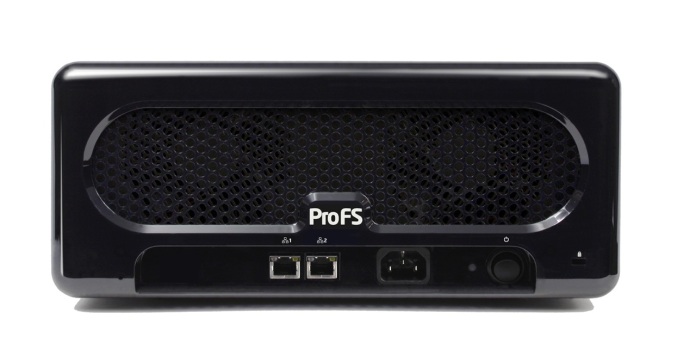 Its ethernet ports can be configured two ways:

The really nice part here is the DroboPro FS works seamlessly with a new piece of software (to be introduced shortly) by Data Robotics, called Drobo Sync. The way it works makes the DroboPro FS the perfect candidate for offsite backups, for disaster recovery purposes.

Say you have two DroboPro FS units. You keep the first one in your company’s server room, do your internal backups to it, over the local network, and then run a quick DroboPro FS to DroboPro FS initial sync job using Drobo Sync. When that’s done, you can take the 2nd DroboPro FS unit to your disaster recovery site, plug it in over there, and Drobo Sync will start doing incremental backups automatically, saving you bandwidth and validating each file on a block-by-block level to make sure the data is identical on both Drobos. This is a solution that would be perfect for overworked sysadmins, because the setup and administration are easy, and the total cost is less than that of comparative solutions.

It uses the same form factor as the DroboPro and the DroboElite, which means it shares the same measures, and the same rack-mount kit. And you can also customize it with Drobo Apps, just like the Drobo FS.

A base DroboPro FS costs around $1,999, but you can buy it bundled with hard drive sets (8TB, 16TB and 32TB). It’s available directly from Data Robotics, or from B&H Photo, Amazon and other retailers.