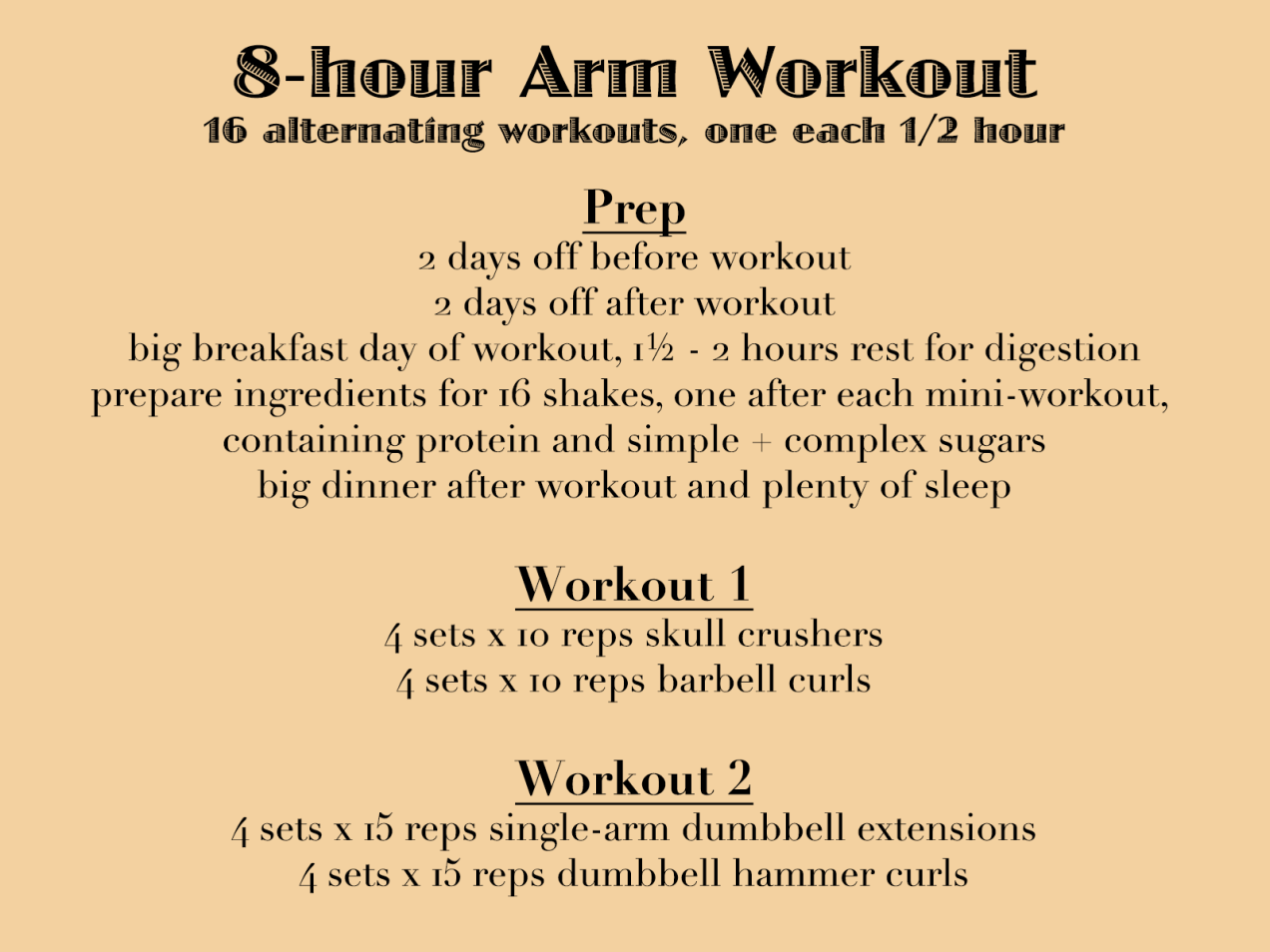 I’d like to show you a marathon 8-hour arm workout that is not for the weak of heart (or body). This is for the dedicated few that really want to go the extra mile in order to grow. If you think that this is too grueling, too taxing, or that it can’t be done without steroids, then do not do it. For those of you that do end up doing it, be prepared to stop when your body tells you it can’t go on. Listen to your body! It’s one thing to push through a plateau or to go on when you’re tired, and it’s quite another to tear a muscle or a ligament in a misguided search for vain glory at the gym.

We all reach certain stages in our workout routines when we need to shock the body and this workout will definitely do the trick — if you can get through it, and most people can’t. I couldn’t. I tried it and got through five hours of it before I had to call it quits.

You’ll understand it best once it’s explained to you in this video featuring Rich Piana. Don’t be fooled by his tattoos and intimidating demeanor, he’s a nice guy who’s been publishing all sorts of informative bodybuilding videos. Sadly, he’s also passed away recently, possibly due to his overuse of steroids. At least he was open about his usage, unlike most other pro bodybuilders.

Following the instructions in the video, I made an infographic, a guide to help you out. Just print it and you’ll be set.

I was elated after I watched “The Adventures of Baron Munchausen”. How can I put it so it’s best expressed? This movie encourages you to achieve your dreams. It tells you that life is an adventure, and that you must go out there and live it to the fullest, chasing after your dreams, unafraid, believing in the impossible, before it is too late. The tale itself is a metaphor that says all of that and more.

The Baron himself is an allegory for one’s soul. When you believe you can achieve what you set out to do, your soul rejoices. It becomes young and full of vigor. That was the Baron at his best, and that’s when he looked like this: When he or others stopped believing in him, he withered out and started looking like he was just about ready to kick the bucket. That’s what your soul looks like when you don’t believe in yourself. It suffocates and dies a slow death with each day you postpone doing what you really want to do. If you have a hard time seeing this, just try to imagine you’re Baron Munchausen. Think of those times when you lost hope in yourself, and I think you’ll agree you looked pretty grim, too. 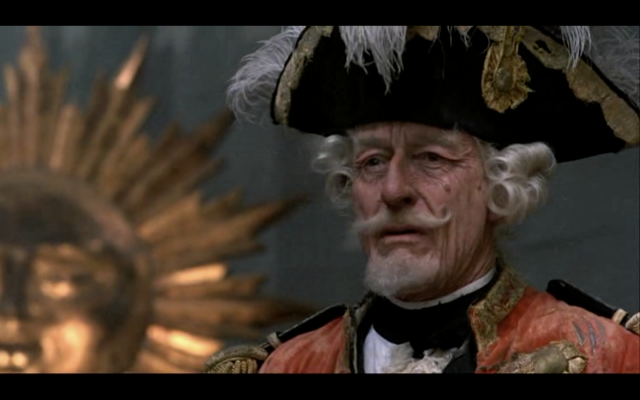 You see, the key is to persist, even when things look miserable and there’s no hope. Oftentimes, better circumstances are just around the corner. Or perhaps what you’re going through is a blessing in disguise, only you won’t know this until after the fact. Never listen to the naysayers, and never let anyone get you down. The foil (bad guy) in the movie was Horatio Jackson, a nasty, no-good, scheming fiend who inflicts pain and suffering on everyone around him. Don’t be that guy. Be the good guy. Be the Baron. 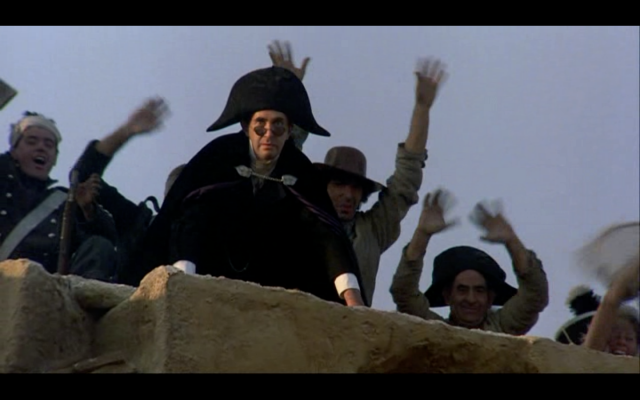 What’s important is that you never give up on what you really want to achieve. If it’s something worthwhile, sooner or later the right door will open and you’ll walk through it, victorious. That’s when those around you will look at what you’ve done in awe, and they’ll get it. 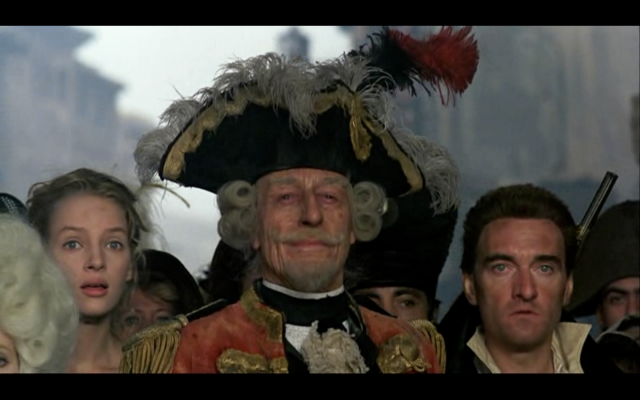 Another wonderful lesson from the movie is that it’s never too late to recapture your dreams. This is shown very well by the Baron’s troupe, who’ve gotten old and have completely forgotten about their special abilities. Their talents have turned into their defects. Yet the Baron inspires them to reach deep down and rekindle the flames that once burned bright in their hearts, and they come to life. Their old talents return. 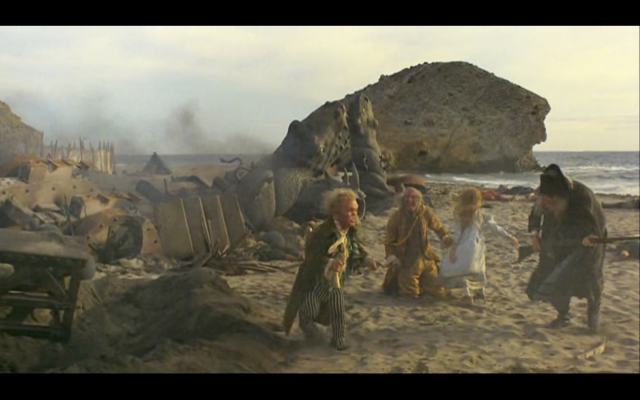 These are just a few of the lessons from the movie. It makes so many more statements, many of them political. There’s a very healthy amount of disdain in the movie for so-called political diplomacy and totalitarian governments of any kind, and I share the filmmaker’s feelings there as well. The larger statement made there is, I think, that people do better when they believe in themselves and connect their talents to achieve something for the greater good, without the government getting involved and mucking things up. I can get behind that.

In the end, the best lesson of all is that you and I and everyone should be the Baron. Go out there. Chase your dreams. Do your best to achieve great things. Don’t let norms and rules and nasty people get in the way. Keep your goal in front of your eyes and ignore everything else, but make sure to listen to the still small voice that is your conscience — portrayed in the movie by Sally, the little girl.

If you’ve already watched the movie, but didn’t see it my way, give it another try. Watch it again through the lens of imagination, and see what you see.

You can find out more about this movie at IMDB, rent it from Netflix, or buy it from Amazon.

Images used courtesy of the filmmakers.