Within the last twenty years, I’ve seen video games get more violent. The graphics and the capabilities of today’s games are mindblowing. They can portray blood and gore better than at any time before.  Violent games are also more popular than ever. One could even call them a rite of passage for kids. Everybody gets to play them at one time or another and some kids play them for years, even into early adulthood.

And yet, when faced with real war, all these “seasoned veterans” of violent video games are unescapably and undeniably floored, mentally and physically. They cannot handle the harsh reality of war, of real conflict, of real blood and real guts and body parts flying about. Their minds reel from the punch of that sickly brew and start to develop serious conflicts. When these people get home, they’re riddled with serious mental issues, many of which fall under the umbrella of PTSD.

It seems illogical, doesn’t it? Shouldn’t these kids be more prepared for war? They certainly act tough. They love to shoot people down when they’re playing games. They have no problem with digital violence. But when it’s happening all around them, they shut down, they vomit, their bladders and intestines empty involuntarily, etc.

Perhaps war and violence had best stay digital. Or perhaps in today’s modern world, with all its laws and rules and regulations, when you can’t even beat up a hoodlum who’s attacked you without being charged with violence yourself, we, its law-abiding citizens, are being turned into mush. We’re too far removed from the reality of life, which in many realms means defending your domain and your family by any means necessary. Or maybe that’s a discussion best left for another post.

Right now, I’m curious if any of you have insights on the subject of this post.

I’m not asking why video games aren’t better at making our youth more violent, less caring when it comes to life and people. I’m trying to understand why they’re so popular when they provide no real value. All they do is waste people’s time. And yet, when kids to go to the store and have their choice of various games out there, they go for the violent games.

I know the military has met with success when training its special forces with special video game scenarios, and has also used video games to train its general troops to fight in close quarters, like in cities. On the whole, I would expect today’s soldiers to be better prepared for war, given their obsession with video games about war, violence and the like — but they aren’t.

When the Duke Nukem series came out in the late 90s, I was a huge fan. There was a time when I played it every day, and I knew almost every trick on each level. I even bleached my hair once to get the Duke Nukem look. Given that I was also working out regularly back then and had some fairly serious muscle on me, it was a pretty good approximation.

As with all such phases, my obsession with the video game passed on, but I still looked forward to the sequel, called Duke Nukem Forever. I waited, along with countless others, since 1997, only to find out last month that 12 years later, in 2009, work on the game stopped altogether. 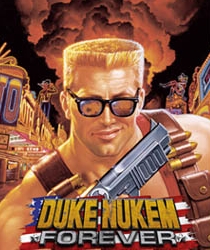 It was, by all means, an expected conclusion to what had become a game industry joke and cliché. Still, when I see the trailer for Duke Nukem Forever, released in 2007, I still feel regret for the promises made so many times that never came true. I’d have loved to play the sequel, if only for nostalgic reasons. This should have been awesome. Instead, it ended up in the crapper. What a shame.