I suppose I should call this “Trip to the C&O Canal – Part Three”, since it’s the third time I write about the C&O Canal (Chesapeake and Ohio Canal) on my site. Here is Part 1 and Part 2. But it’s certainly not our third trip, because we’ve been there numerous times, during various times of the year.

This last time, we did it by bike, starting at Lock 7, which can be accessed from the Southbound Clara Barton Parkway. We traveled past the last gatehouse, which I think was was Lock 12, and past the Carderock Wall, to some section of the canal beyond it. 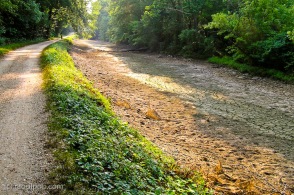 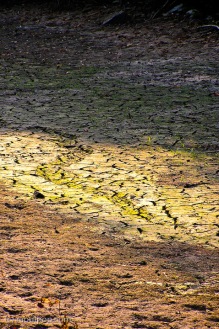 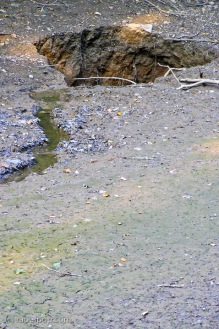 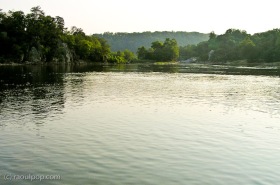 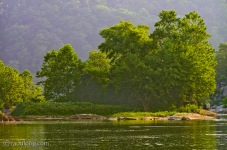 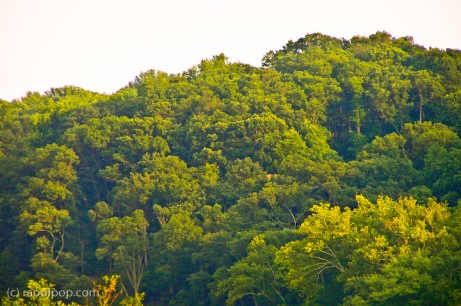 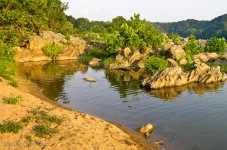 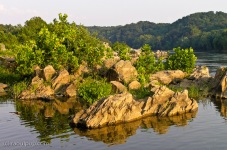 It’s a lot of fun to bike on the C&O Canal. For one thing, the path that accompanies the canal used to be the old towpath for the mules that pulled the barges, so you know you’re stepping on a piece of history. For another, the canal towpath was built to have no steep grades. Other than little hills that correspond to the drops in altitude at lock gates, the towpath is mostly level, so you won’t get long-winded trying to walk, run or bike up long hills.

As you’ll see in the photos above, some parts of the canal were completely dry. I’m not sure what caused this. Perhaps it was the summer heat, or as you’ll see in a couple of the photos, a sinkhole that opened upstream and possibly swallowed all of the water from those sections of the canal.

The idea for the C&O Canal originated with George Washington, though in another form. Having worked as a land surveyor in his youth, he dreamed of the possibility of making the Potomac River navigable. He thought the only way to do it would be to build skirting canals around its falls. While he was still young, he could not convince the State of Maryland to do this, but after the Revolutionary War, let’s just say it was easier for him to get people to do things.

The Patowmack Company was formed in 1784, and construction began on the skirting canals. Washington himself supervised the construction personally. Beside the canals, channels in the river itself were deepened and boulders were removed. There was a great deal of work to be done, and the work wasn’t finished until 1802, three years after Washington’s death.

Although the canals were useful, the route didn’t generate as much traffic as it should have. For one thing, it was only truly usable up to two months out of the year, due to low water levels. Plus, it was very difficult to get the boats back up the river, because of the current. People ended up dissembling the boats downstream, walking back upstream, and building another boat. This was not efficient nor productive.

George Washington’s idea was interesting, and people kept thinking of a way to capitalize on it. A way to use the Potomac River needed to be found. That’s where the construction of a canal came in. It wasn’t new technology, as that sort of construction was already used in Europe, and even dates back to antiquity.

On November 5, 1823, a convention was held Washington, which led to the chartering of the company that would build the canal on January 27, 1824, and finally, to the start of construction of July 4, 1828.

The construction of the C&O Canal ended in October of 1850 at Cumberland, Maryland. The original plan to extend the canal to the Ohio River had to be modified, because of the extremely hard nature of the work, its slow progression, and financial troubles with the parent company.

Parts of the Canal were opened as they became available, and it worked as a water route until 1924. Frequent flooding closed it for months, and sometimes, for entire seasons, and in 1889, the parent company went bankrupt. It was then taken over by the canal’s rival, the B&O Railroad. In 1902, they even took over the boats. Whereas they had belonged to the people themselves — to the families that toiled night and day to carry goods down the canal — from that year forward, they belonged to the Railroad company…

The B&O Railroad did as little maintenance as possible on the canal, and in 1924, when another flood destroyed parts of it, they closed it down altogether. The canal slowly deteriorated afterwards, until it was taken over by the National Park Service in 1971. They restored the towpath and re-watered parts of the canal.

“Transporting goods and people by canal dates back to antiquity. The lock gates used on the C&O Canal were an adaptation of a design by Leonardo DaVinci in the late 1400’s. Until the advent of the railroad, water travel was far superior to land travel.”

If you’d like more information about the C&O Canal, I recommend the official C&O Canal NPS website. Make sure to use the menu on the left side of the page to navigate through the various sections. It’s a little hard to find your way around at first, but it pays off if you keep digging — there’s a lot of information posted there.