This video explains why I chose to fix my wheelbarrow instead of throwing it away. (It has to do with conserving resources and reducing waste.)

Its inner chamber couldn’t be patched after too many punctures, and when I went to Home Depot and Lowe’s, I discovered I couldn’t buy a new inner chamber, because they’re no longer stocked. I’d have had to buy an entire new wheel and tire assembly, for almost the same price as a new wheelbarrow. What I did instead was to buy a new tubeless tire, which is made of solid rubber and never needs replacing, thus saving my wheelbarrow from the scrap heap and eliminating the need for new wheels in the future.

Last summer, I made a custom king size bed frame for our bedroom, out of solid wood. I held off on writing about it until now, nine months later, because I wanted to make sure the end result was solid and worth writing about. We’ve been sleeping on it ever since, and there’s nothing wrong with it, so yes, I can heartily recommend it. 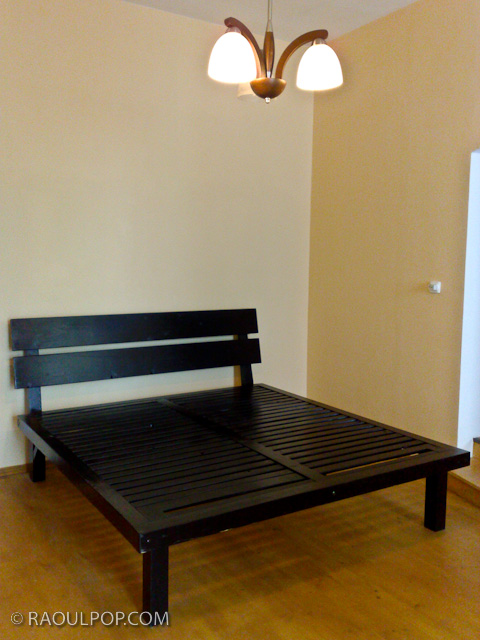 I was fed up with the laminates and particle board garbage they call furniture these days, and I wanted to build something that would last, out of a quality, sustainable material like wood. I chose pine, because it was softer and easier for me to work with. Although I’ve also built a custom cat house for our three cats, I’m no expert carpenter. I just like to work with wood. It’s a wonderful material.

END_OF_DOCUMENT_TOKEN_TO_BE_REPLACED

We’ve recently finished putting together a “severe weather” garden shed in our yard, made by a company called Arrow. We wanted a model that could withstand hurricane-force winds, since we live in South Florida, where hurricanes do occur from time to time. The particular model that we purchased was the Homestead 10′ x 8′ (HS108). We filmed our progress along the way (it took 1½ months from beginning to end), and you can see the video below.

The process of selecting and getting the garden shed approved and built highlighted several areas of concern when it comes to the manufacturing, retail and inspection aspects of this particular model. It all turned out to be more involved and more costly than we thought. It certainly was an adventure in do-it-yourself construction.

We looked for guidance from our city (Hollywood, FL) when we made the decision about what garden shed to get, but they were not helpful. All they told us was that many of the sheds sold at local building stores may not be approved for use and may not pass the inspections, and that we needed a product approval sheets for the shed.

We went to Home Depot looking for sheds, but we thought the pre-assembled ones they had on display were flimsy and might not withstand strong winds. Then we went to Lowe’s looking for a shed, found one made by a company called Arrow, only to be given the run-around when it came to the product approval sheets. The store clerk thought they were on the Lowe’s website. They weren’t. The management thought the Contractor Services department had them. Perhaps they did, though we couldn’t get them to help us. Then we tried the Arrow website, where they should have been listed alongside the shed specs. They weren’t.

Fortunately (or perhaps unfortunately), we did find a particular model on the Arrow website, called the Homestead, rated for “severe weather” and engineered for the Miami-Dade county building code, which is stricter than what we have in Broward county. That meant it was sure to be approved for use here, and would pass the inspections if assembled correctly. The price was much higher than we thought though (about $1,700) for a pre-fab, un-assembled shed that came in two flat boxes and was only 10 feet by 8 feet (80 sq ft). Still, I remembered seeing a Homestead model at Lowe’s, so we went back to check. To our surprise, it was on sale for a little under $500. We thought ourselves in luck, but the clearance price should have raised a red flag for us. We bought it, knowing we’d at least have no problems getting it approved with the city.

Sure enough, it was approved, and the time for the initial inspection came. The clerks at Lowe’s told us we’d need to pour a six-inch concrete slab. Fine, no problem. Wrong. According to the building inspector, the engineering plans for the shed (put together by Arrow to supposedly comply with the Miami-Dade building code) required a house-sized foundation, which meant digging a trench all around the edge of the foundation that was 1 foot wide by 1 foot deep, with a 45-60 degree slope on the inner lip, using re-bar around its perimeter, not just wire mesh, and naturally filling it all up with concrete. That more than quadrupled our original estimate of the amount of concrete that we needed to purchase. We thought 1 pallet would be enough for a 6-inch slab. We ended up buying over 4 pallets of concrete (almost 5) in the end.

Forget the clearance price! The ridiculous foundation requirements in effect raised the price of the shed to well over its original retail price once again!

I have to lay the blame for this squarely in Arrow’s lap. After all, they were the ones who hired an engineering firm to put together the plans for the shed, and to get them approved with Miami-Dade. I sincerely doubt there’s anything in the Miami-Dade building code that specifies one must have a house-sized foundation for a flimsy pre-fab shed. That makes no sense whatsoever. All other sheds on the market do just fine with a 4-6 inch concrete slab, yet this model, which is shorter and smaller than the rest, somehow needs a house-sized foundation? No way. Someone was careless or fearful when they drew up the plans, and the customers are now paying for it!

I might have been more lenient in my overall view of the shed, had it proven sturdier during the assembly and in the final review. But it’s just as flimsy and cheaply made as the rest of the pre-fab garden sheds on the market, many of which come pre-assembled and cost a third of this shed’s original retail price. There’s nothing to set it apart for me from the rest, other than the presence of extra wall beams at waist height, and the lack of a need to use hurricane anchors to strap it to the ground once it’s assembled. The sheet metal used for its walls and doors is just as cheap and easily bent or dented, the doors open and close just as badly as on other pre-fab sheds, and to top it all off, it’s so darn short I bang my head on the lintel every time I go in and out!

Oh, and lest I forget, let me mention that Arrow forgot to provide the sufficient number of bolts and nuts needed to assemble the shed properly. We were delayed by a day during the assembly process because we needed to make a trip to the store to get some more hardware, which should have been included with the shed to begin with. On the bright side, they did include the Hilti anchors needed to anchor the shed to the concrete foundation, though I expected to need to get those myself.

Yes, the shed is now fully assembled, approved, and we’re using it. But it proved to be much more expensive in the end than it should have been, it took much more time and effort to get the project completed, and in my eyes at least, it wasn’t really worth all that. Imagine how those people who bought this shed at its original retail price felt! They must have felt they were ripped off royally. Thank goodness we at least got it at clearance price.

The City of Hollywood could also have been more helpful when I called them asking for guidance on garden sheds. Instead of dismissing me with some generic advice, they could have said, hey, here’s one of our building inspectors, talk to him and he can recommend sheds that he knows will get approved, cost less, and take less time to put together. While I understand that a government employee can’t recommend specific brands and models, at least I could have gotten helpful advice that could have saved us money, time and effort. Instead, the City of Hollywood was the only city in Broward County to raise property taxes this year, during a big recession, making me wonder exactly what we’re paying for, if they’re not helpful to us, its residents.

All I can say is this shed better hold up when the next hurricane comes, or Arrow will hear from me again.

This is part eight of a personal carpentry project whose stages were recorded on video: building a cat house for our two kittens. Here are the other parts:

In this post, you’ll see the finished cat house, hear a bit more about the thinking behind the project, and find out my final opinion about what I’ve built. At this point, the cat house is pretty much complete, although a couple of small touches — like a frame around the window and a rubber door at the entrance — still need to be done. This means there will be a part 9 at some point in the near future, likely within the next 1-2 months.

As mentioned in the videos and in one of the first parts, the cat house was built using both leftover and reclaimed wood and thermal insulation. Pretty much everything I used in its construction I already had lying around my yard from ongoing renovations to our home. The only things I bought specifically for it were the two casters, the asphalt roof tiles, and the wood screws, which added up to a cost of 100 RON or about $33.

This is part seven of a personal carpentry project whose stages were recorded on video: building a cat house for our two kittens. Here are the other parts:

In this video, I’ve already completed all of the carpentry work and the cat house is assembled. It’s also been stained and it’s about to be treated with wood wax. Lots of details about what’s been done and what’s about to be done are offered in the video, such as what I’m going to do about the entrance and how the roof has been mounted and how it seals against heat loss.