As you read this, Ligia and I are supposed to be in Florida. Instead, I’m back at work. We were supposed to fly out yesterday. Everything was set. We were really looking forward to it.

To make matters worse, there were no other outgoing flights. All were full. The earliest available flight was on Saturday. No thanks. We went around to all the other airlines and checked. They had nothing, unless we were willing to pay Monopoly prices and fly tonight or on Friday. That would have been okay if only we could have paid with Monopoly money…

What were we to do? We could have gotten angry, but that would have been pointless. So I took out my 5D and started taking photos of the airport. I’d always wanted to do it and never got around to it. Isn’t DCA beautiful?

The main floor is shown above. I love the pillars and arches supporting the roof. 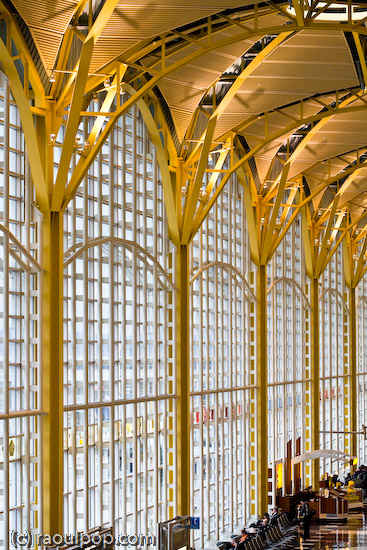 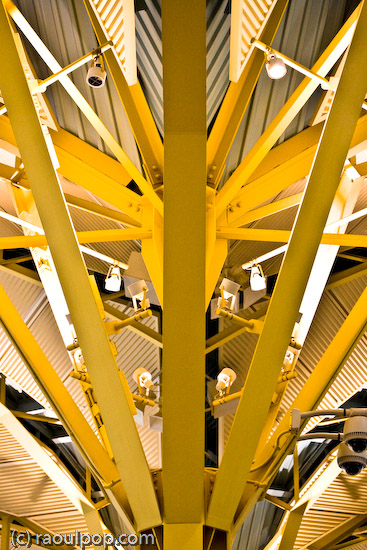 The ceiling is made up of repeating cupolas, as you can see above, and each cupola has a skylight in its center. It’s such great design!

I think I could spend a few days walking around the airport and taking photos. There are so many possibilities with the light, as it comes through the wall of glass or the skylights and reflects off the floor… It’s just beautiful, and if you get the right mix of people walking through (not too many, not too few), it really makes the place look great! 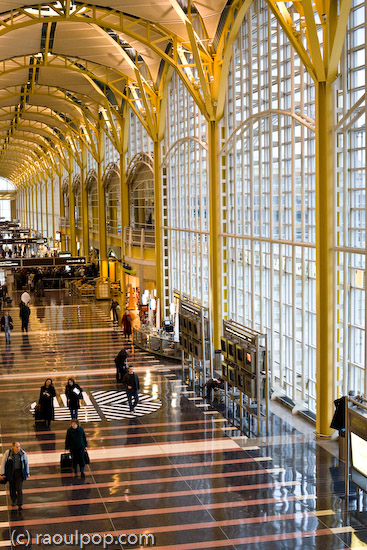 I leave you with an outside shot of the control tower, taken from the Reagan National metro station. It felt pretty painful to get right back to it a few hours after we’d just left it, on our way to FL…

There’s a neat tunnel that goes under 355 (one of the main roads in our area) and surfaces right at the Grosvenor-Strathmore metro station, under a beautiful canopy of curved glass, framed with steel ribs and anchored with pillars.

If you’ve ever seen one of the old classic cars (early 1910s and 1920s) that had the pull-down roof which folded in the back, the glass canopy follows the same concept, except (of course) it’s anchored in the up position all the time. Come to think of it, the design also recalls the large, see-through fuselages of the big bomber planes of WWII. The effect is a successful combination of post-modernism with industrial-age design elements.

The same canopy design (initially restricted to just a few metro stations) has now been extended to all of the stations I’ve visited. The canopy sizes are varied based on the size of the tunnel that leads down to the metro. I’m glad to see a good design philosophy being consistently applied and adapted to existing conditions, and I congratulate WMATA on making sure the work was carried through to completion.

This is my Week 6 submission for the 2008 Community Challenge.

In Brazil, women have finally gotten their wish: pink-striped, women-only metro cars. Apparently, there’s a lot of groping and feeling going on in Brazil (shame on you, fellow men!) and it’s so bad they lobbied for women-only cars. Now they’ve got them. The article mentions how women themselves will police the cars, to make sure no men get aboard. They can call on police if needed to evict unruly men. Here’s the link to the article.